Here on Earth, we only have a handful of clear, empirically solid clues to help us figure out the celestial mechanics of our cosmos. If we are going to ignore these precious few indicators, we might as well not bother thinking through the mechanics of our cosmos at all. The apparent “retrograde” motions of our system’s bodies are among these precious few, invaluable observations. The fact that our planets appear to periodically come to a halt — and start moving backwards for a few weeks or months — is something that has mystified astronomers. However, contrary to popular belief, these (irregular) retrograde motions have never been accounted for in a satisfactory manner.

Now, if you are among those contending that Earth is non-rotating, totally stationary and/or flat as a French pancake, you will still need to explain why our planets periodically appear to reverse course. It is hard to imagine what exactly such an explanation could be, but if you’re determined to believe such theories, you could come up with something to this tune:

“Oh, we occasionally see those planets retrograding because they are, in fact, rocket-propelled spaceships … and from time to time, the pilots will slam their engines into reverse gear!”

While we may laugh at such fanciful theories, it is a poorly-acknowledged fact that the question of the observed irregularity of our outer planets’ retrograde and stationary periods is still far from being settled. To wit, the Copernican/Keplerian model does not adequately account for the irregular nature of these intervals; while the ancients ultimately failed to reconcile them with the Aristotelian ideal of uniform circular motions, a notion which model-makers pursued for millennia. 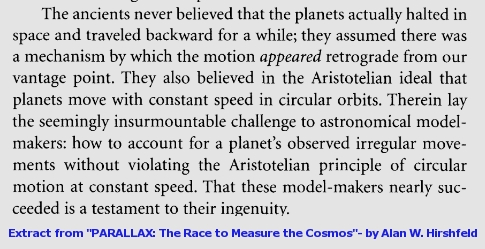 As we saw in Chapter 7, the retrograde motions of Mercury and Venus are incompatible with the Copernican/Keplerian model, since their observed durations are inconsistent with a heliocentric geometry. In fact, the same can be said about the retrograde motions of our so-called “outer planets” (from Jupiter to Pluto) or what we should more correctly refer to as our binary system’s “P-type planets”. We shall start with these and see if the TYCHOS can overcome the incongruities afflicting the heliocentric interpretation of our outer planets’ irregular motions in our skies.

Unless you are an astrophysicist, you might wonder what a “P-Type” planet is. A clear explanation can be found at this web page of the Vienna University’s department of Astrophysics. 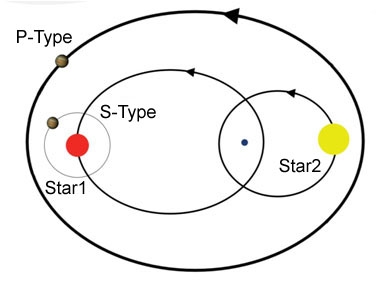 Please overlook the highly elliptical orbital shapes in this graphic from the above site and note the P-Type planet’s behavior in relation to the central celestial bodies.

P-Type planets are bodies that circle around a binary system. They are circumbinary. In the case of our own Sun-Mars binary system, these would be our outer (a.k.a. “superior” or “Jovian”) planets from Jupiter outwards: Jupiter, Saturn, Uranus, Neptune and Pluto. As of the Copernican theory, the retrograde motions of our outer planets are meant to be caused by Earth periodically “overtaking them” as we hurtle around the Sun around our “inside lane”, faster than each one of them.

For instance, Jupiter is observed to periodically stop moving (remaining stationary for a variable number of days) and start “retrograding” for about 120 days (i.e.; moving in the opposite direction of its ordinary motion). Curiously though, Jupiter can remain stationary for as many as 24 days or for as little as 12 days! This substantial irregularity has been an enigma; what could supposedly cause Jupiter (as it gets routinely overtaken by Earth every thirteen months or so) to take such distinctly longer or shorter “lunch breaks”? This can hardly be imputable to any sort of Keplerian variables or perturbations, for these large disparities between Jupiter’s standstill intervals can occur within relatively short time periods. Let’s have a look at a typical such period (between 2019 and 2020) as predicted by Copernican planetariums:

One can only wonder why Jupiter would possibly behave in this way in the Copernican model. Shouldn’t Jupiter remain stationary for a fairly equal number of days, each time it meets up with Earth around their concentric, near-circular orbits?

The TYCHOS model submits the following explanation for this substantial variance, although the reader may have to return to it later on in order to fully conceptualize it (in Chapter 26, I will expound in more detail what I call “a Man’s Yearly Path”, the peculiar loop around which we all “swirl” each year). For now, suffice to say that the annual, asymmetrical frame of reference of any earthly observer follows a geometric curve known as a “prolate trochoid”.

In order to visualize how such a trochoid can manifest itself in the real world, imagine affixing a little fluorescent sticker on the side of your bicycle tire. If you just spin the wheel around its axis, the sticker will revolve in simple, uniform circles. But if you hop on your bike and start pedalling down the road, passers-by will see your fluorescent sticker tracing such trochoidal loops.

In the TYCHOS, Earth spins once daily around its axis while slowly moving forward. If you could hover above Earth for a full year and film a time lapse video of someone lighting a firecracker outside their house at midnight every night, those flashes will trace a trochoidal path similar to one of the three above loops. We may thus imagine the difficulty for earthly observers to make sense of any long-term astronomical observations since they are themselves being carried around this looping trajectory.

This leads us to how the TYCHOS model can geometrically account for Jupiter’s odd behavior. In the TYCHOS, the three well-known motions of Jupiter (prograde, stationary & retrograde) are plotted in my below graphic. The irregularities of Jupiter’s alternating retrograde and prograde motions is caused by the “accelerating and decelerating” transverse displacements of the observer in relation to Jupiter’s (more or less perpendicular to the viewer) direction of travel. Likewise, the duration of Jupiter’s standstill intervals will also fluctuate substantially. This, due to the constantly-variable vectors of the annual trochoidal curve (with respect to Jupiter’s celestial positions) along which any earthly observer will be carried. 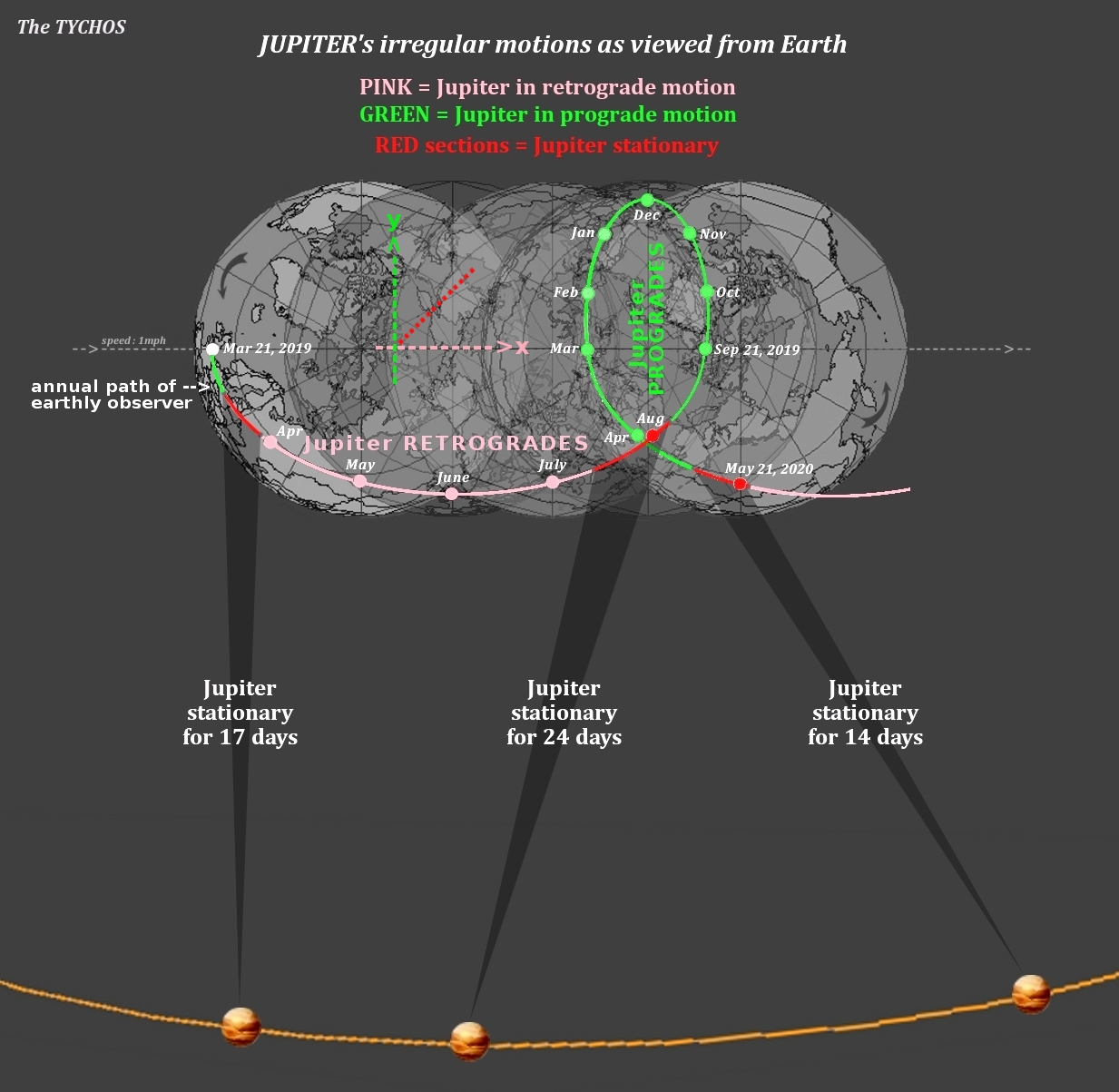 Note that Jupiter’s three “stationary intervals” depicted in my above 2019/2020 example clearly correspond to time periods during which an earthly observer’s annual motion will transition between the “x” and “y” coordinate axes constituting the vector components of a Man’s Yearly Path. In fact, all of our “P-Type” planets are observed to behave in similar manners, as they alternate between prograde, stationary & retrograde motions. The irregularity of these various intervals are a natural consequence of our ever-shifting, “non-linear” (or, if you will, “non-uniform”) earthly frame of reference.

The Danish astronomer Ole Roemer is famously credited for having first determined (or approximated) the speed of light. As the story goes, Roemer made this epochal discovery while observing the motions of Jupiter’s largest moon “Io” (which employs about 42½ hours to revolve around Jupiter). He noticed that the eclipse periods of Io, as it passed behind Jupiter, were irregular; they lasted longer (as his heliocentric reasoning went) “whenever Earth was receding from Jupiter” and they lasted for a few minutes less “whenever Earth was approaching Jupiter”. According to his calculations, the total time-discrepancy amounted to about 22 minutes. He came to the conclusion that this 22-minute difference (subsequently adjusted to 17 minutes) was due to the time needed for light to travel across the distance of 2AU (twice the distance between Earth and the Sun).

In the TYCHOS, Roemer’s observations have a plain, “geoptical” explanation I’ve illustrated below. Whenever Jupiter appears to retrograde, the eclipses of Io will appear (as viewed from Earth) to last for a slightly shorter time than when Jupiter moves prograde. The time differential is thus nothing more than an angular “space-time” optical illusion. 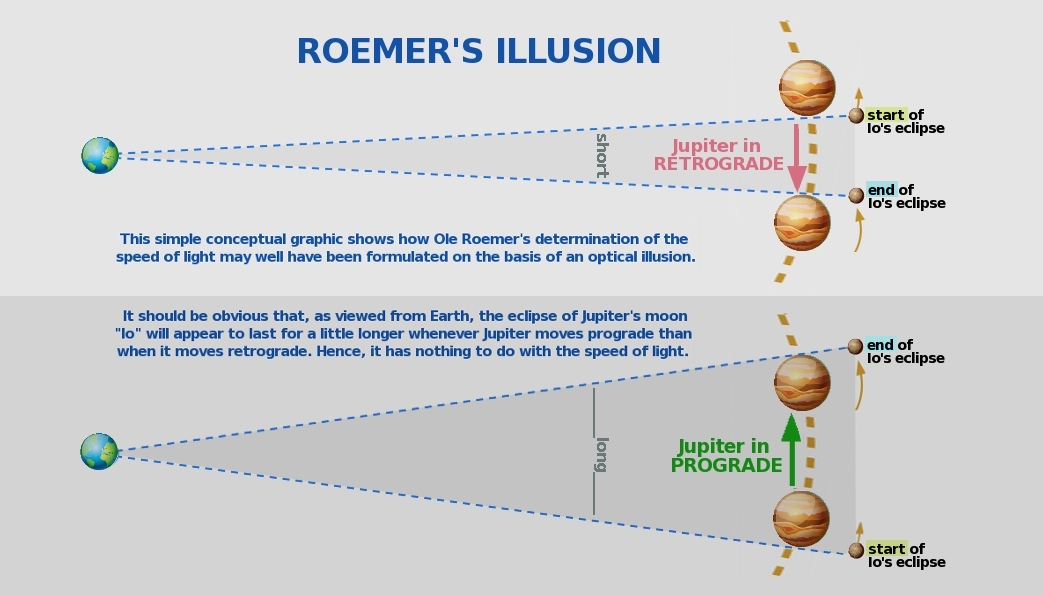 Please note that my above graphic isn’t about disproving the currently-accepted velocity of light (approx. 300,000 km/s). It is only meant to show that Roemer’s acclaimed (yet misinterpreted) observational discovery can be readily accounted for by the TYCHOS model without the need for Earth’s supposed orbital motion around the Sun.

In short, the irregular periods of Io’s eclipses are quite simply a direct consequence of Jupiter’s alternating motions as viewed from Earth. One may say that the history of astronomy is riddled with illusory conclusions. One of the weaker spots of the human mind appears to be its spatial perceptions when confronted with the many tricks of perspective that nature loves to play on us.