The very brightest of all the stars in our skies is Sirius. It is a two-body (or perhaps three- or four-body) system composed of (as far as is known today) a large star, Sirius A, and a far smaller object, Sirius B. The far smaller Sirius B was, in fact, only first observed as late (or as recently, if you will) as 1862 by Alvan Clark, with what was then the world’s largest refractor telescope. 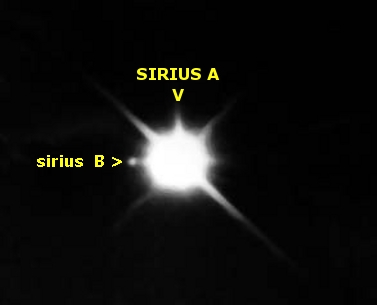 First photograph of SIRIUS A and Sirius B (by Lindenblad — 1973)

Here is how some astronomy websites illustrate the orbits of SIRIUS A and Sirius B).


Above images — The Dogon and Sirius by Martin Clutterbuck

As mentioned earlier, binary systems such as the one composed of Sirius A and Sirius B (what with their vastly unequal sizes) pose a very serious problem for Einstein’s theory of general relativity (as well as for Newton’s gravitational “laws”). The issue of the relative dimensions of Sirius A and B is of primary interest to the TYCHOS model. To wit, the very first objection that Copernican astronomers will have against the notion that Mars is the Sun’s binary companion will, inevitably, be the following:

As I will demonstrate, this predictable objection is a non-starter. The empirically verifiable fact that the diameters of Sirius A and Sirius B are proportionally identical to our Sun and Mars invalidates this core objection right off the bat. I shall now expound this in due detail.

Please note that I am about to compare solely the observed angular diameters of these 4 bodies — since any estimation of their respective masses is nothing that can be empirically verified or demonstrably proven from Earth. In fact, all mass estimations are based upon Einstein’s and Newton’s postulated physical laws. Astronomy literature offers no rational explanation as to why the “midget star” Sirius B, which is only slightly smaller than our planet (91.6% of Earth’s diameter), should possibly have a larger mass than that of the Sun! Yet, in recent astronomy texts, you may read extraordinary things such as:

As for the diameter of Sirius B, on Wikipedia we can read that:

“In 2005, using the Hubble telescope, astronomers determined that Sirius B has nearly the diameter of the Earth, 12,000 kilometres, with a mass 102% of the Sun’s.”

You see, the current scientific reasoning (in astronomy circles) goes a bit like this:

“Since Newton’s Gravitational Laws predict so elegantly the masses of our own solar system, our entire universe must therefore obey the same laws. Therefore, since Sirius B is far smaller than Sirius A (though the two of them revolve around each other), then the mass of Sirius B must be phenomenally large.”

I trust that anyone can sense the inherent fallacy of such logic. What we have here is nothing but a “textbook case of confirmation bias” on the part of our world’s Copernican astronomers.

Let us now set aside the mass question and just compare the observable, relative diameters of our Sun and Mars, and contrast them directly with those of Sirius A & B.

(Sirius A and B dimensional data from Wikipedia.)

Thus, since the relative diameters of SUN & MARS versus those of SIRIUS A & SIRIUS B are nearly identical, the objection that “Mars is far too small to be the binary companion of the Sun” can be promptly dismissed. The very existence of the Sirius A – Sirius B binary system constitutes verifiable, empirical evidence that such a system can and does exist in our cosmos.

Perhaps an easier way to remember this proportional similarity between the Sirius system and our own Solar System (which, to my knowledge, no one has ever pointed out to this day) is to express it as follows:

Sirius B is approximately 204 times smaller than Sirius A.

Mars is approximately 204 times smaller than the Sun.

The two components of the brightest star in our sky are thus proportionally “identical” to the Sun and Mars; is this just a mere coincidence? Who knows? In any event, this fact should put to rest any objection as to the sheer plausibility (existing gravitational “Laws” notwithstanding) of our big Sun and the far smaller “planet” Mars being binary companions.

Yet, there may be even more astounding similarities in store between the Sirius system and our own Solar System; although further studies are needed to confirm its existence, it would appear that the Sirius binary system may harbor a third body – provisionally named “Sirius C”.

We shall now take a look at what is currently known about this presumed third component of the Sirius system and the fascinating aspects surrounding some ancient accounts pointing to its possible existence.

In the above diagram (“Sirius A and B in 1990”), we see a blue dot indicating the “Center of Mass” of the Sirius binary system. If Earth occupies the barycentric zone of the Sun / Mars binary system, could there be a planet located at the barycenter of the Sirius A / Sirius B binary system? As it is, the possible existence of a 3rd body (“Sirius C”) within the Sirius system is a longstanding (and still-ongoing) debate. A fairly recent French astronomical study appears to have corroborated the probable existence of Sirius C:

Here follows a simple diagram (author unknown) to be found on various websites depicting a proposed orbital configuration of the Sirius system. It features the elusive “Sirius C” (a.k.a. “Emme Tolo”) positioned at the barycenter of the Sirius A / B binary system: 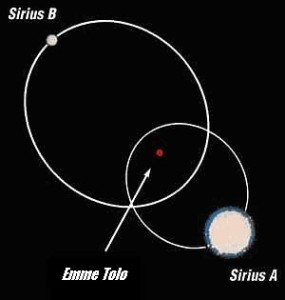 “Emme Tolo” is the name given to the elusive (as yet unseen) Sirius C by the Dogons, an ancient African tribe whose culture and religion was based around their inexplicably advanced knowledge of the Sirius system. As it is, some of the Dogons’ astronomical knowledge has been confirmed in modern times, such as, for instance, their astounding estimation of 50 years for the orbital period of the Sirius binary system (today reckoned to be 50.1 y). In fact, it still remains a veritable mystery just how the Dogons even knew of the existence of Sirius B since it is not (currently) visible with the naked eye — but only with large, powerful telescopes.

Amazingly, the Dogons somehow also knew about an even smaller body revolving (in lunar fashion) around “Emme Tolo” (Sirius C) — much like our Moon revolves around Earth. They named this satellite “Nyan Tolo”, which translates as “the Women’s Star”. Of course, our Moon (la Luna in Italian, and in Greek mythology represented by the gorgeous goddess Selene) has always been “the women’s star”, what with its sidereal orbital period of 27.3 days (which more or less matches the average female menstrual cycle).

I don’t wish to dwell too long on the Dogons and their inexplicably-advanced knowledge of the Sirius system, since this whole topic appears to have been, in later years, “sensationalized” and exploited (to generate popular book sales) by a number of authors from the UFO/New Age crowd and submerged by a dross of fanciful conjectures. Suffice to say that we simply don’t know how the ancient Dogon tribe acquired this knowledge. It seems unlikely, however, that this entire Dogon affair is just a figment of someone’s imagination. In any event, if it should turn out that Sirius C (“Emme Tolo”) and its moon (“Nyan Tolo”) both exist, we will certainly have to seriously consider the compelling prospect that the Sirius System is some sort of “Twin family” of our own solar system:

So, once more: would it be “preposterous” to think that Mars is the Sun’s binary companion? Would the (alleged) huge mass of the Sun versus the (alleged) tiny mass of Mars rule out the idea that the two of them are binary companions? According to modern astrophysics, given the currently-assumed masses of Sun and Mars, yes. Nonetheless, I think it is now wise to ask if all of those “mass” assumptions – as imagined by Sir Isaac Newton – have any bearing on the physics of two celestial (binary) bodies revolving around each other.

In conclusion, I submit that the very existence of the Sirius system is strongly supportive of the TYCHOS tenets. It provides empirical evidence that a small celestial body can indeed be the binary companion of a far larger celestial body. Whether the Dogon story is fictitious or not will not change the observable facts.

Next, I will introduce the basic configuration of the TYCHOS system. Although it may seem somewhat premature to unveil it at this early stage I feel it is necessary in order for the reader to get a general overview of the TYCHOS before tackling the successive chapters.