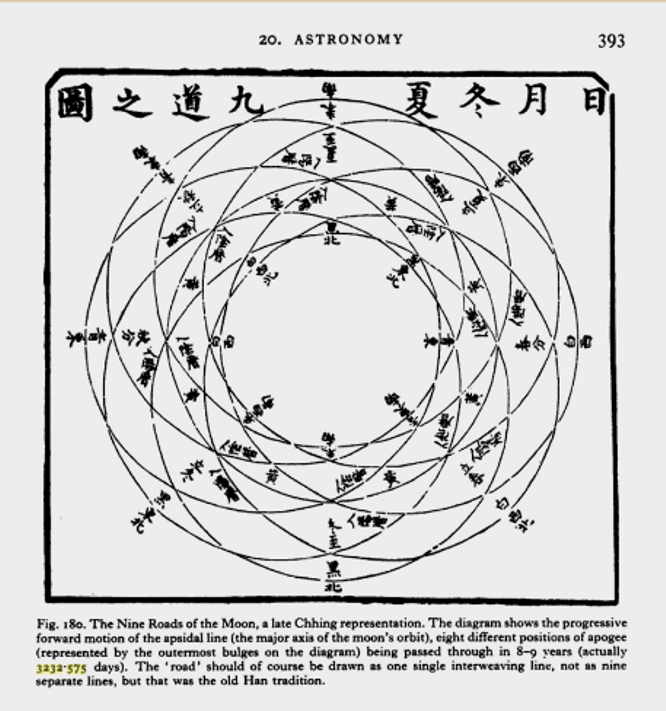 A Chinese diagram of the apsidal precession of our Moon’s Apogee
from p.393, Science and Civilisation in China, Volume 3: Mathematics and the Sciences of the Heavens and the Earth by Joseph Needham (1959)

Let’s see: can we perhaps find any long-term resonances between our Moon’s behavior and that of Mercury, the Sun’s junior moon? (Mercury, of course, transits in perigee when it is in inferior conjunction with the Sun and transits in apogee when it’s in superior conjunction with the Sun). To verify this, we shall multiply our Moon’s perigee & apogee periods by 10, so as to obtain more significant long-term periods with which to compare our Moon’s and Mercury’s respective perigee & apogee transits:

Let us now ask ourselves the following two questions:

1. “Can Mercury be observed to transit in perigee at both ends of a 32,316-day interval, just like our Moon?”

As astounding as this may seem, the answers to both of these questions is, “Yes!”

I have used screenshots of the NEAVE online planetarium to show that the Sun’s junior moon Mercury indeed behaves very much like our own Moon, over extended intervals, to a most exacting (and truly breathtaking) degree of precision. On September 30, 1936, and then (32,316 days later) on March 23, 2025, Mercury is found transiting the Sun as it proceeds in retrograde motion at inferior conjunction. This constitutes Mercury’s perigee, or closest proximity to Earth. 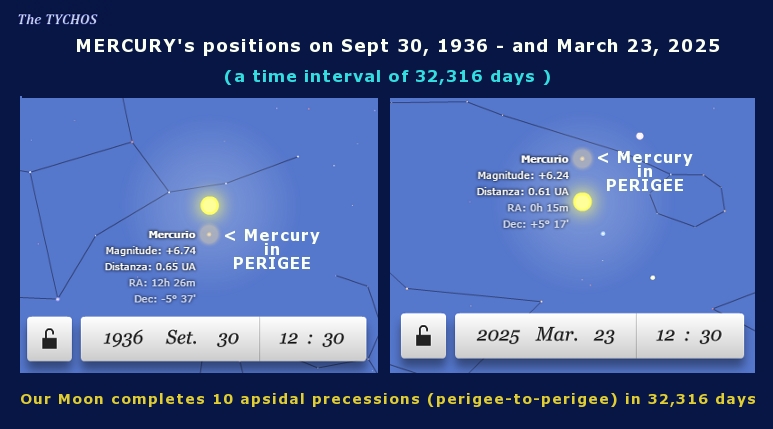 On December 30, 1934 and then 32,325 days later on July 1, 2023, Mercury is found transiting as it proceeds in prograde motion behind the Sun at superior conjunction which, of course, constitutes Mercury’s apogee, or furthest point from Earth. 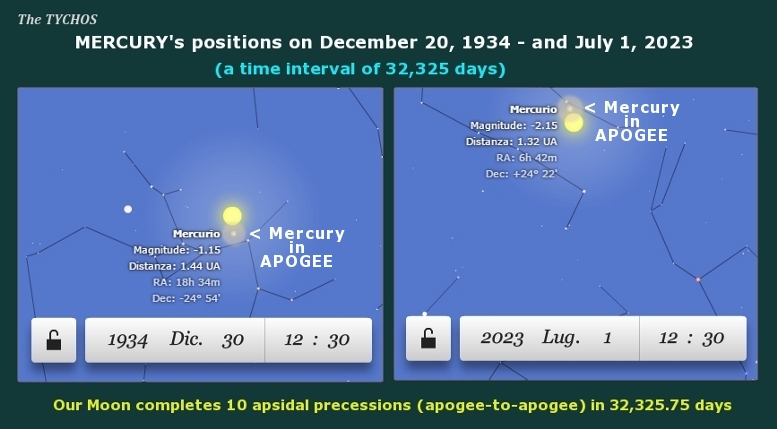 All of the above would constitute under the Copernican model a string of extraordinary coincidences well into statistical improbability. But in the TYCHOS model, these long-term periods commonly shared by Mercury and our Moon are expected, since these two celestial bodies are, respectively, the lunar companions of the Sun and Earth.

Please consider the following point. These two pairs of Sun-Mercury conjunctions (as viewed from Earth) occur at exact, diametrically opposed sides of our celestial sphere. The odds of this occurring within the Copernican model would, of course, be staggering since they are thought to be two planets revolving around wholly separate orbits at independent speeds. Why would the Earth, the Sun and Mercury be synced in such a manner? 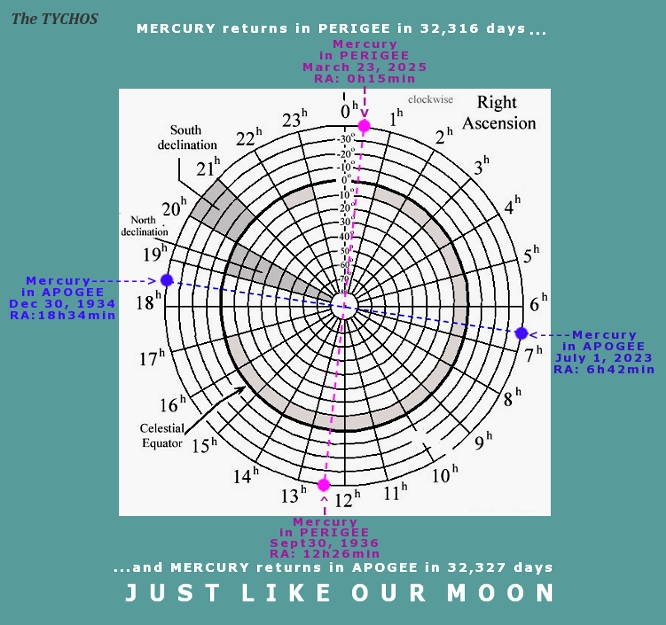 In our magnetically-locked binary system of interrelated bodies, the regularly-spaced recurrences of Mercury’s perigee and apogee transits are not just coincidental. Mercury and the Sun both revolve around Earth (and so does our Moon). They “work in unison” in a very systematic, orderly fashion. Mercury and our Moon are both lunar bodies (i.e.; moons) exhibiting virtually identical long-term orbital periods.

About the “anomalous” precession of Mercury’s perihelion

Not everyone may know that Einstein’s “General Relativity” was primarily founded around his acclaimed “resolution” of the purportedly anomalous advance of Mercury’s perihelion. It was, in fact, long considered as one of the most compelling proofs of the GR theory, as you may read in the Wikipedia article about “Tests of General Relativity”:

However, numerous authors have since then pointed out innumerable problems with Einstein’s equations and computational methods, as well as with his highly questionable determinations of Mercury’s supposedly anomalous apsidal precession. As it is, Einstein himself eventually distanced his subsequent GR research from the dubious argumentations surrounding Mercury’s perihelion advance.

“Einstein’s paper devoted to the GR prediction of Mercury’s perihelion advance, is the only one among his publications that contains the explanation of the GR effect. […] Since then, to our knowledge, he never returned to the methodology of the GR perihelion advance problem. […] As a matter of fact, the GR foundational premises have been subjected to changes and reinterpretations (optional, alternative, or claimed ‘correct’ ones) by Einstein himself, his advocates as well as today’s GR specialists and self-proclaimed ‘experts’.”

— Einstein Paper on the Perihelion Motion of Mercury from GRT by A.A. Vankov (2011)

“It is thus proven that Einstein’s Mercury correction is completely false, and fails for planets as well as black holes! […] The only possible conclusion to be made is that the Einstein GR correction is completely false. Thus, one of the only proofs that GR is valid has been shown to be incorrect, and invites GR to be discarded as a valid theory!”

At the time of the vivid debate set off by Le Verrier about Mercury, the equinoctial precession was observed to be about 5026” (arcsecsonds) per century. Since Mercury’s perihelion was observed to precess by 5600” per century (of which 531” were deemed to be caused by the “gravitational tugs” of the other planets) the whole controversy revolved around the supposedly anomalous 43 extra arcseconds per century attributed to Mercury’s precession.

As the story goes, the mystery of these pesky 43 extra arcseconds could not be solved by Newton’s gravitational theories, but were then ‘elegantly resolved’ by Einstein’s convoluted GR.

I have no desire to add more fuel to the centuries-long inferno concerning Mercury’s allegedly anomalous precession. Yet, I feel compelled to ask if I might at least approach the problem with new insight.

As such, I wish to highlight two points that I find more than coincidental:

The allegedly anomalous precession of Mercury was 43” per century.*

The allegedly anomalous precession of Venus was 8.6” per century.*

* Source: Anomalous Precessions from Reflections on Relativity by Kevin Brown (2017)

As already mentioned above, the observed equinoctial precession was, at the time, 5026” per century. If we divide 5026 by Mercury’s synodic period we obtain:

And if we divide it by Venus’ synodic period we obtain:

Since Mercury, a moon of the Sun, revolves 3.125 X around the Sun every year,

Similarly, since Venus is a moon of the Sun and revolves 0.625 X around the Sun every year,

I may just have plainly demonstrated that there is no “anomalous perihelion advance” at all. What is observed of Mercury and Venus is simply the relative ratios of their precessional progressions, as they revolve around the Sun in their respective orbital periods. Consequently, Einstein’s weirdly acclaimed GR theory is — as already concluded by several respected authors — based on thin air.

“There are significant arguments that General Relativity has not been proven experimentally, and that it contains mathematical errors that invalidate its predictions. Vankov has analyzed Einstein’s 1915 derivation and concludes that when an inconsistency is corrected, there is no perihelion shift at all!”