At this point, you might be asking if the proposed diameter of Earth’s PVP orbit (113.2 Mkm) is in any way verifiable. Do we have any supportive data or indications that might help corroborate this value? So far, you have only read my position that the 113.2 Mkm figure is based on Earth’s assumed, physical circular motion underneath our slowly alternating North stars.

I will use some well-known relative astronomical distances in order to verify whether they may provide any sort of indications in support of my posited diameter.

Note: Further on, I will expound on my consideration that the currently accepted distances between the celestial bodies of our own system are essentially correct, while the claimed stellar distances are not.

First, the difference between Mars’s aphelion and perihelion is calculated:

Secondly, the difference between Mars’s (combined) furthest & closest oppositions and the PVP orbit:

In other words, the known and widely accepted Mars-to-Sun & Mars-to-Earth distances appear to be telling us – by virtue of their observed dimensions – that the unknown value we are looking for (the diameter of Earth’s orbit) can be found to be a very plausible 113.2 Mkm. Here is an illustration to help you visualize the significance of and results of this calculation. 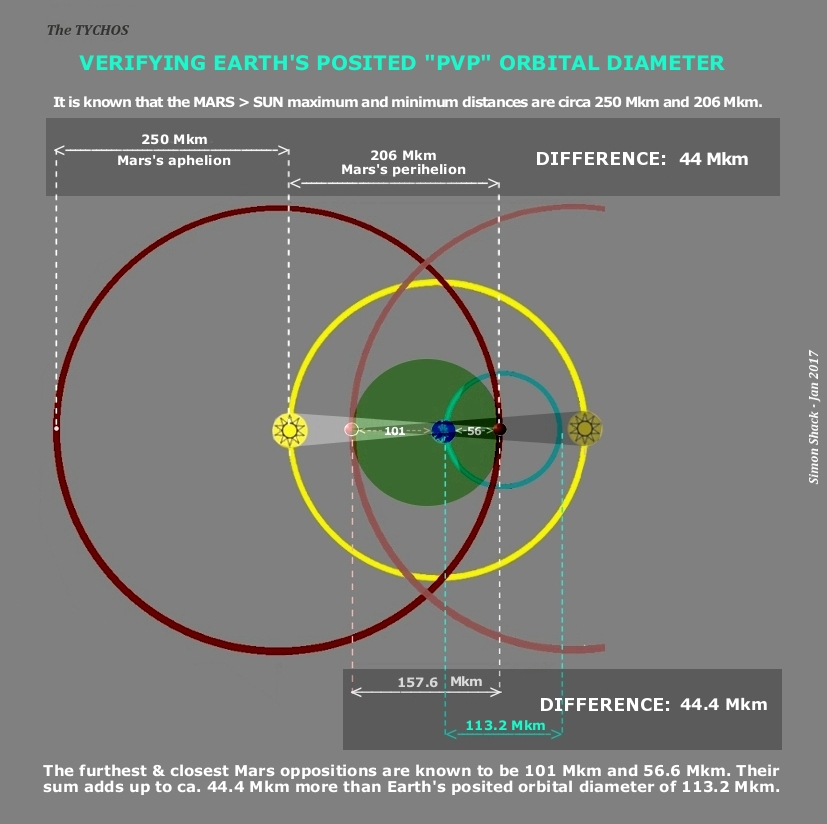 Moreover, with the help of the above graphic, we may now make some further interesting considerations.

Remember: my postulated diameter of the PVP orbit is more precisely 113.23 Million kilometers.

If we divide this value by 2, we get:

As we saw earlier on, Mars will transit at its closest distance from Earth – in so-called “opposition” – every 15 or 17 years (see the “79 years of Mars” chart in Chapter 6). If we take the five closest Mars transits in 79 years (between the year 1956 and the year 2035) to obtain a mean, here is what we find:

The average closest Mars opposition transit in the above 79-year sample:

This 56.604 value is, you may agree, close to 56.615 Mkm. So why is this significant? Well, it clearly seems to indicate that the closest Mars oppositions occur, on average, “smack in the middle” (within mere thousands of kilometers) of Earth’s 113.23 Mkm-wide PVP orbit. Mars regularly transits through the secular center of our system. To a hypothetical observer hovering above our North Pole, this center will only become apparent over the course of 25344 years (or one Great Year). 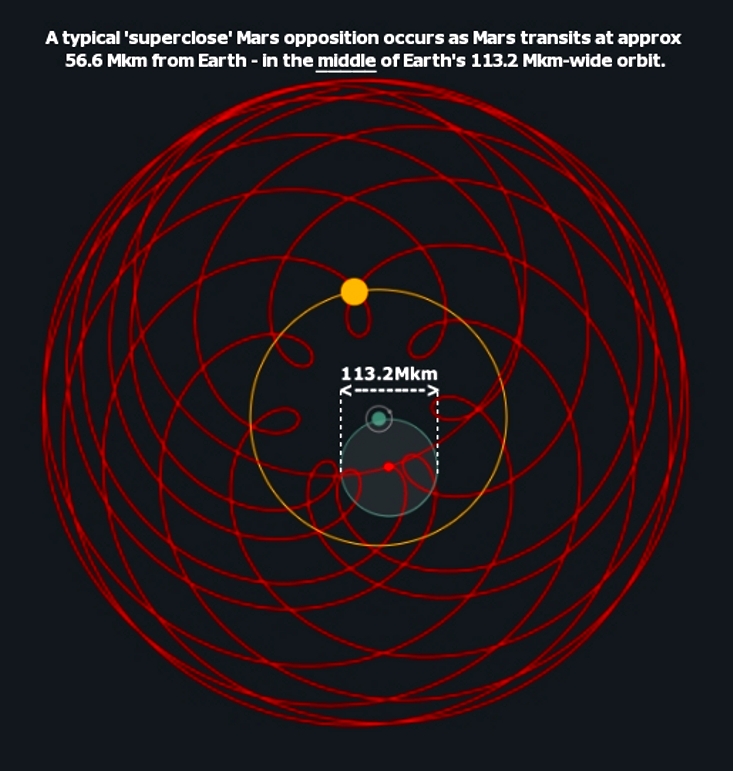 In other words, if you ask me, “What does Earth circle around? What exactly is at the very center of our system?”, my answer would be: “Nothing! Except Mars likes to pay it a visit now and then.” Having said that, it would probably still be correct to state that Earth is located at or near the barycenter of our system. Further study is needed with respect to this particular issue.

As we saw in Chapter 6 the average diameter of Mars’s “opposition ring” (157.6 Mkm) reflects the difference between the diameters of the respective orbits of Mars and the Sun.

Now, if we divide the Sun’s orbital circumference by 6, we wondrously obtain:

Ergo, the Sun’s orbital circumference is near-exactly 6 X the diameter of Mars’s “opposition ring”! Our system seems to be resonating “around” very whole numbers.

This is confirmed by the empirically-observable fact that Mars’s orbit processes around the system by 12. min. of RA every 36 years.

This means that Mars’s orbit will process, in one Great Year, by:

Note that this value is our all-important Annual Constant of Precession (henceforth, ACP).

Ergo, Mars’s procession rate is exactly 6 X that of the Sun. But there’s more.

Curiously, even Kepler was fascinated by this recurrent hexagonal leitmotiv to be found in nature.

“’There must be a cause why snowflakes have the shape of a six-cornered starlet,’ Kepler wrote in De nive sexangula. ‘It cannot be chance. Why always six?’”

Might a contributing factor also be the total of the internal angles of a hexagon is 720° (2 X 360°) thus reflecting the fact that we live in a binary system ruled by the Sun and Mars, whose circular motions interact at a 2:1 ratio? You may read some interesting things about hexagons in their Wikipedia entry.

We may note that molecular structures also theoretically group up in numbers, and there may be some common principles between the micro and macro worlds, which the TYCHOS system helps to unlock or shed light upon. I will leave the complex topic there for now, with hope that it inspires future research, and continue with the description of our cosmos.

We shall now see that Venus provides us with further indications, not only in support of our posited 113.2-Mkm-diameter of Earth’s PVP orbit — but also of Venus being a moon of the Sun. Let me describe what exactly my below graphic illustrates:

The difference between the known Earth-to-Sun maximum and minimum distances (152.1 Mkm versus 147.1 Mkm) is 5 Mkm. 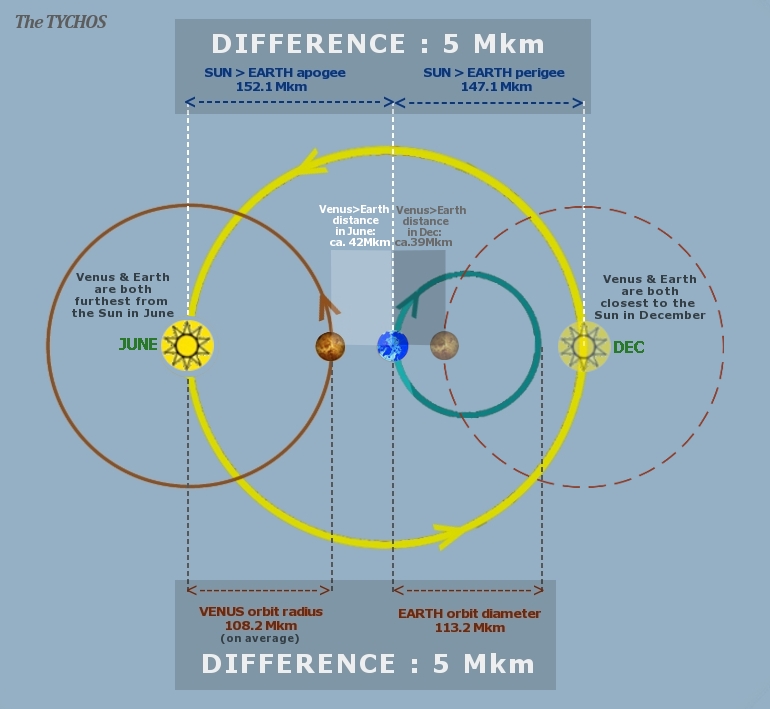 Thus, we see that this well-known 5 Mkm difference between the Sun’s apogee and perigee (152.1 Mkm versus 147.1 Mkm) reflects the difference between Venus’s mean orbital radius (108.2 Mkm) and Earth’s posited orbital diameter in the TYCHOS (113.2 Mkm).

All in all, we may now be reasonably satisfied with our estimated value of our Earth’s orbit. It appears to be proportionally and relatively congruent with the known orbital dimensions of the Sun, Mars and Venus in addition to their observed positional fluctuations. Surely, for all of these mutually-consonant distances to be entirely coincidental would be beyond extraordinary. It is therefore plausible that Earth’s orbital diameter is 113,230,000 km as posited by the TYCHOS model.