Does Earth’s polar axis wobble? Is Earth’s so-called “Third Motion” a tenable theory? Not a chance in Heaven. Let us see why.

According to the Copernican “Lunisolar” theory, Earth’s “equinoctial precession” is caused by a slow clockwise wobble of Earth’s polar axis, completing one full 360° “reverse” rotation in about 26,000 years or so.

A “retrograde / clockwise wobble”? That’s right. We are told that Earth’s polar axis wobbles very slowly, over centuries, and that this spin proceeds in the opposed direction of Earth’s daily rotation and revolution. Supposedly, this reverse rotation of Earth would be caused by assorted “gravitational forces generated by the Moon and the Sun (hence “Luni/Solar”) and the other planets in our Solar System”.

Over time, this axial wobble would, as the theory goes, gradually shift our visual orientation towards our Pole Stars. To be sure, the so-called Lunisolar theory is still today firmly upheld by academia as an established scientific fact. This is in spite of the numerous, glaring problems afflicting its fundamental tenets (as conclusively demonstrated in later years by a number of independent authors). 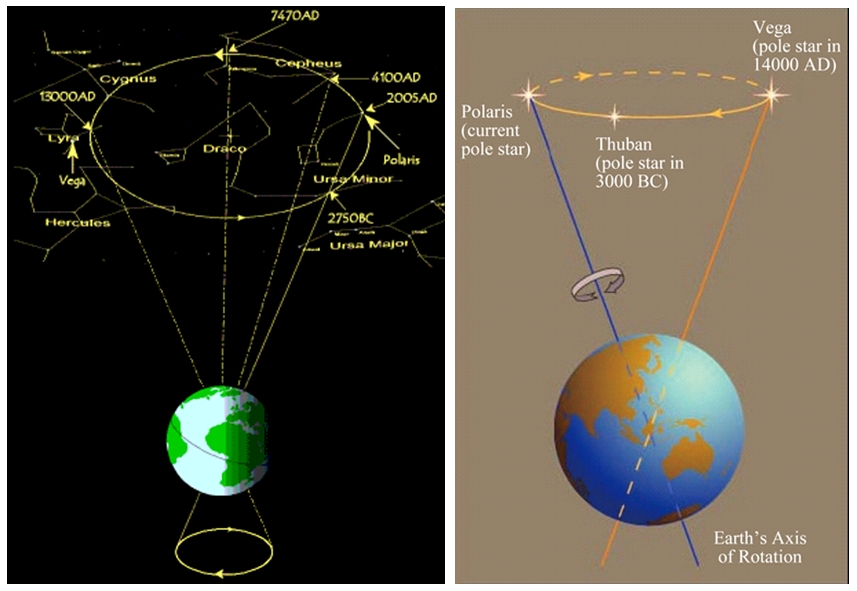 This is also known as the “Third Motion of Earth” – the other two being its 24-hour counter-clockwise rotation around its axis and its ostensible revolution around the Sun. This presumed wobble is directly contradicted by observation. Yet, it always was an essential prerequisite for the Copernican theory’s very survival, since it was meant to account for the fact that the stars are observed to precess (or “drift Eastwards” in relation to Earth’s equinoctial axis) by about 50 arcseconds per year.

However, this Copernican excuse simply doesn’t hold up to close scrutiny. The so-called “Precession Paradox” is best summarized in this fine paper by Walter Cruttenden, whose Binary Research Institute has done sterling work at demonstrating, point-by-point, the untenable tenets of the so-called “Lunisolar” theory:

— p.8, Comparison of Precession Theories: An Argument for the Binary Mode by Walter Cruttenden (August 12, 2003)

Cruttenden (and a number of other independent authors) have struck a mortal blow to the Lunisolar theory. It has, by now, been thoroughly demonstrated that the so-called “Third Motion of Earth” cannot possibly account for the observed equinoctial precession in relation to the starry background. Hence, as incredible as it may seem, the famed “precession of the equinoxes” remains to this day a wide-open question: it is a cosmic mystery still awaiting for a rational, scientific explanation.

Here follow some quotes and links to papers exposing the insurmountable problems with the Lunisolar wobble theory.

“Lunisolar wobble required the pole to move by about one degree every 71.5 years based on the current precession rate, hence the pole should have moved about 6 degrees since the Gregorian Calendar change (420 years ago), thereby causing the equinox to drift about 5.9 days. This has not happened; the equinox is stable in time after making leap adjustments.”

“When Earth spins on its axis in West to East direction (Anti clockwise) it is natural that North Pole of the axis moves in the same direction. It is how North Pole can describe a circle of precession about star Polaris in a clockwise direction opposite to the natural rotation of North Pole of the axis conspicuously that remains unexplained. The hypothesis of Earth’s wobble does not explain above contradiction. Hence, the hypothetical proposition that the retrograde motion of North Pole is due to Earth’s wobble is not credible.”

“If the slow wobble of Earth’s axis causes the precession of the equinoxes, it is a product of shifting perspective and should affect everything we view from Earth. Some astronomers argue that objects within our solar system do not appear to precess. Only objects outside of the solar system do. If this is the case, then the Earth’s wobble cannot be the cause of precessional movement.”

“The Earth’s changing orientation to inertial space (as required by any binary orbit of our Sun), can be seen as Precession of the Equinox. This fact has been masked by the illusion called the lunisolar explanation for precession.”

— Understanding Precession of the Equinox: Evidence our Sun is part of a Long Cycle Binary Star System by Walter Cruttenden and Vince Dayes (2003)

“In summary, a number of independent groups, all studying the same problem of lunisolar mechanics have concluded that precession is most likely caused by something other than a local wobbling of the Earth.”

— p.2, Comparison of Precession Theories: An Argument for the Binary Mode by Walter Cruttenden (August 12, 2003)

Tycho Brahe rightly predicted that the “triple motion” of Earth, as proposed by Copernicus, would be refuted.

“The Copernican system, [Tycho Brahe] proclaimed, with its ‘triple motion of the earth will be unquestionably refuted, not simply theologically and physically, but even mathematically, even though Copernicus hoped that he had proposed to mathematicians sufficiently mathematical statements to which they could not object’.”

It is ironic that Copernicus is often hailed as the man who “simplified” and “elegantly resolved” the complex riddle of our cosmic motions, while the models of Ptolemy and Brahe were dismissed as too complex just because, according to some critics, they required too many different motions of our solar system’s bodies.

Here is a graphic (from this Italian Wikipedia page) illustrating those “elegant” earthly motions that the Copernican theory requires: 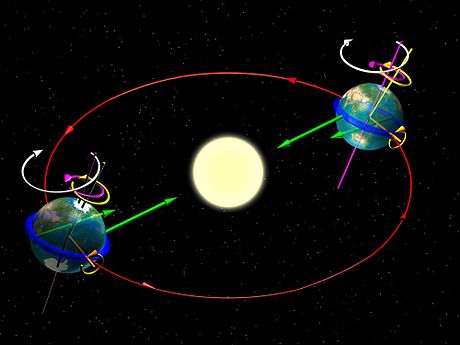 Note that the white clockwise arrows represent the so-called “Lunisolar precession”, while the other arrows represent all the other motions piled onto Earth to explain (or avoid explaining?) the true motions of our system. Enough to make you dizzy, is it not? One can only wonder why the Copernican “Lunisolar” theory was accepted by the world’s scientific community in the first place, and how it can possibly have remained unquestioned and unchallenged for so many centuries.

Most people will be familiar with the old Occam’s-razor-inspired adage that states that “the simplest explanation for some phenomenon is more likely to be accurate than more complicated explanations.” Evidently, such elementary wisdom was lost on the proponents of Copernicus’s heliocentric theory. Indeed, the idea of Earth slowly wobbling around its polar axis in the opposed direction of its very rotation doesn’t conform to any physical phenomenon known to humankind.

As we shall see, the TYCHOS model requires no more than two terrestrial motions: