Skip to content
Consider starting with this briefing on our next topic:
Wikipedia entry on “Asteroid belt”

The very existence of our so-called Main Asteroid Belt (and the more distant Kuiper belt) also lend support to the notion of the Sun and Mars being binary companions. The Main Asteroid Belt is located in the celestial region between Mars and Jupiter. Here’s how it is conventionally illustrated: 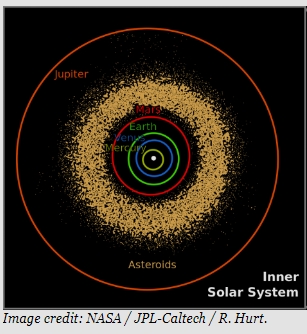 No one really knows why and how this belt of dust and debris came to be in the first place. Over the centuries, explanations have been tried. For example, “The asteroid belt is made of fragments of a much larger planet that once occupied the Mars-Jupiter region, this planet having suffered an internal explosion or a cometary impact many million years ago”.

“Why does our solar system have an Asteroid Belt? One theory that astronomers have is that 4.6 billion years ago, when our solar system was being formed, a tenth planet tried to form between Mars and Jupiter. However, Jupiter’s gravitational forces were too strong, so the material was unable to form a planet.”

Clearly, both of these theories are nothing more than unproven conjectures. They are, after all, diametrically opposed: the first speculates that a planet did form in that region and then exploded. The second contends that no planet could ever have formed there due to the gravitational forces of Jupiter. Both fall short of describing any plausible cause and effect process that would account for the Main Asteroid Belt’s formation, nor why our Main Asteroid Belt would have settled precisely between the orbits of Mars and Jupiter.

On the other hand, asteroid belts are naturally to be expected around binary systems as illustrated by this animated graphic to be found at the Binary Research Institute’s website.

Above — an image from Sheer Edge by BRI

As two binary companions periodically cross paths along their intersecting orbits, fields of rocks, particles and debris will be ejected as they collide, to be flung into a wider, circumbinary orbit. In the case of our Sun-Mars system, it should therefore be naturally expected that our main asteroid belt should be located as is observed: just outside Mars’s orbit, in the celestial region between Mars and Jupiter.

Understandably, since asteroid belts consist of very small particles, they are particularly hard to detect. Nonetheless, more and more so-called “debris discs” are continually being discovered and, sure enough, virtually all of them are found around binary systems suspected of containing one or more planets. Most notably, circumbinary debris discs have been observed around systems such as Fomalhaut, Vega, Tau Ceti, Epsilon Eridani, Beta Pictoris and Copernicus (a.k.a. “55 Cancri”) – all of which are high on the lists of “exoplanet hunters”, those modern-day astronomers specializing in the detection of possibly habitable planets outside of our solar system.

Above — “Debris disc” around binary system Fomalhaut, from Wikipedia

“The discovery of an asteroid belt-like band of debris around Vega makes the star similar to another observed star called Fomalhaut. The data are consistent with both stars having inner warm belts and outer cool belts separated by a gap. This architecture is similar to the asteroid and Kuiper belts in our solar system. […] The gap between the inner and outer debris belts for Vega and Fomalhaut also proportionally corresponds to the distance between our Sun’s asteroid and Kuiper belts. This distance works out to a ratio of about 1:10 with the outer belt 10 times farther away from its host star than the inner belt. As for the large gap between the two belts, it is likely there are several undetected planets, Jupiter-sized or smaller, creating a dust-free zone between the two belts.”

In other words, today we have empirical evidence of binary systems surrounded by both an inner and an outer asteroid belt. This is just like our own Main Asteroid belt and Kuiper belt. Even the distance between the two similar belts is proportionally similar to that of our own!

For what it’s worth, the general consensus in our world’s scientific arena appears to be that water was brought to Earth by asteroids. No one really knows for certain, but it is fascinating to read what is currently being theorized:

“FOLLOW THE WATER : More and more research suggests that asteroids delivered at least some of Earth’s water. Scientists can track the origin of Earth’s water by looking at the ratio of two isotopes of hydrogen, or versions of hydrogen with a different number of neutrons, that occur in nature. One is ordinary hydrogen, which has just a proton in the nucleus, and the other is deuterium, also known as ‘heavy’ hydrogen, which has a proton and a neutron. The ratio of deuterium to hydrogen in Earth’s oceans seems to closely match that of asteroids, which are often rich in water and other elements such as carbon nitrogen, rather than comets. (Whereas asteroids are small rocky bodies that orbit the sun, comets are icy bodies sometimes called dirty snowballs that release gas and dust and are thought to be leftovers from the solar system’s formation.) Scientists have also discovered opals in meteorites that originated among asteroids (they are likely pieces knocked off of asteroids). Since opals need water to form, this finding was another indication of water coming from space rocks. These two pieces of evidence would favor an asteroid origin.”

Now here’s the funny thing: “exoplanet-hunting” astrophysicists render all sorts of computer simulations in order to assess the probability of the presence of water on planets in the Habitable Zone (“HZ”) of any given star system. Their studies have concluded, in essence, that binary systems have a far higher probability (of several orders of magnitude) to contain planets harboring liquid water. This is because in a so-called single star system (such as our solar system is believed to be) there would be far less instability and fewer perturbations causing asteroids to be flung off course, to deliver their water to any given planets.

“Of course, this leaves the question of whether water transport via asteroids is a viable mechanism for supplying a single star planet system (like our own Earth) with liquid water. There are currently still several competing hypotheses as to how our planet obtained its water supply, but these sorts of simulations should shed light on the feasibility of water transport through impacting bodies.”

It follows that, if these academic studies are anything to go by, and if our Earth were part of a single star system, the probability of water existing on our planet would be extremely low. Yet, here we are, with about 71% of our lovely blue planet drenched in water!

In conclusion: it is today a known, observed and verified fact that asteroid belts are a distinctive attribute of binary systems. Moreover, the presence of oceanic amounts of water on Earth may indicate that we live, in all likelihood, within a binary system. Hence, the very existence of our Main Asteroid Belt (at its peculiar location between the orbits of Mars and Jupiter) certainly appears to lend support to the fundamental premises of the TYCHOS model.